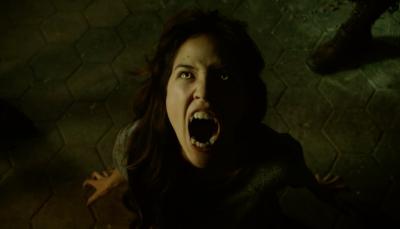 Teen Wolf was all about the ladies in “Dreamcatchers.” In the episode, Tracy went on a killing spree while stuck in a night terror; Kira and Lydia worked on figuring out what was going on with Tracy; and Malia tracked down Tracy and put her killing spree to a stop.

“Dreamcatchers” passed the Bechdel and race test but did not pass the Russo test.

There were several named women in “Dreamcatchers” and there were several occasions where these named women talked to each other without mentioning men so the episode easily passed the Bechdel test. “Dreamcatchers” also passed the race test, and the episode passed this test because there were several occasions where non-White characters talked to each other without mentioning White people (e.g., Mason told Kira that he didn’t know what a kitsune was and Dr. Deaton and Scott talked about Tracy). However, while the episode passed both the Bechdel and race test, it did not pass the Russo test.

While Mason (who is gay) was in “Dreamcatchers” and he was not solely defined by his sexual orientation (e.g., he was also a student, a friend and he was interested in the supernatural world), he didn’t add anything important to the plot of the episode and he could have easily have been taken out of the episode without causing any substantial change to the plot. Mason thus failed to pass all of the requirements of the Russo test, and “Dreamcatchers,” consequently, did not pass the Russo test.