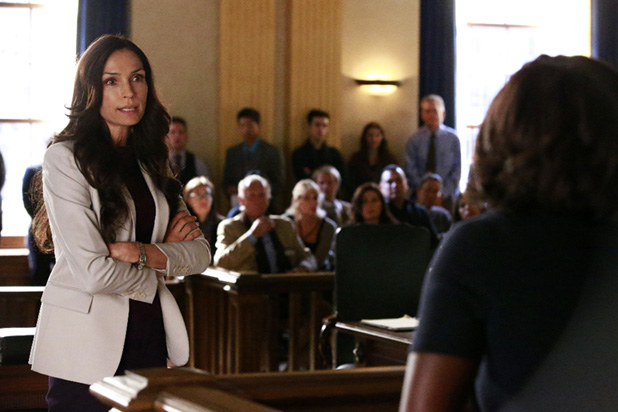 HOW TO GET AWAY WITH MURDER - "She's Dying" - Annalise and her team are blindsided when investigators try to pin a new charge on the wealthy siblings she's been hired to represent. Meanwhile, things for Annalise become even more difficult when she's brutally cross-examined on the witness stand during Nate's preliminary hearing, on "How to Get Away with Murder," THURSDAY, OCTOBER 1 (10:00-11:00 p.m., ET) on the ABC Television Network. (ABC/Mitchell Haaseth) FAMKE JANSSEN

Nate’s case went to court and Eve placed Annalise on the stand and pinned Sam’s murder on her (Annalise) on How to Get Away with Murder, “She’s Dying.”

“She’s Dying” passed the Russo and race test but did not pass the Bechdel test.

In regards to the Bechdel test, named women talked to several times in “She’s Dying,” but because men were always mentioned in these women’s conversations, the episode did not pass the test.