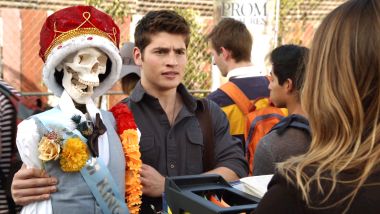 On Faking It, “Prom Scare,” the students of Hester High were forced to attend prom and to take a date with them. This, of course, instigated mass hysteria as all of the students attempted to find a date – Lauren, Amy, Karma and Shane included.

“Prom Scare” passed the Bechdel and Russo test but did not pass the race test.

There were numerous named women in “Prom Scare” and there were several instances where some of these named women talked to each other, but men were almost always mentioned in their conversations. However, because there was one instance where named women talked to each other without mentioning men (e.g., Amy called Jasmine and asked her to go to prom with her [Amy]), “Prom Scare” passed the Bechdel test. “Prom Scare” also passed the Russo test, and the episode passed this test due to four different LGBTI characters – Amy, Lauren, Shane and Wade.

Amy, Lauren, Shane and Wade all passed the Russo test because 1) they are all LGBTI and they were in the episode 2) because none of them were solely defined as being LGBTI (e.g., they were also defined as being students) and 3) because if any of them had been removed from the episode, the plot would have significantly changed as “Prom Scare” was an ensemble episode where Amy, Lauren, Shane and Wade all played key parts.