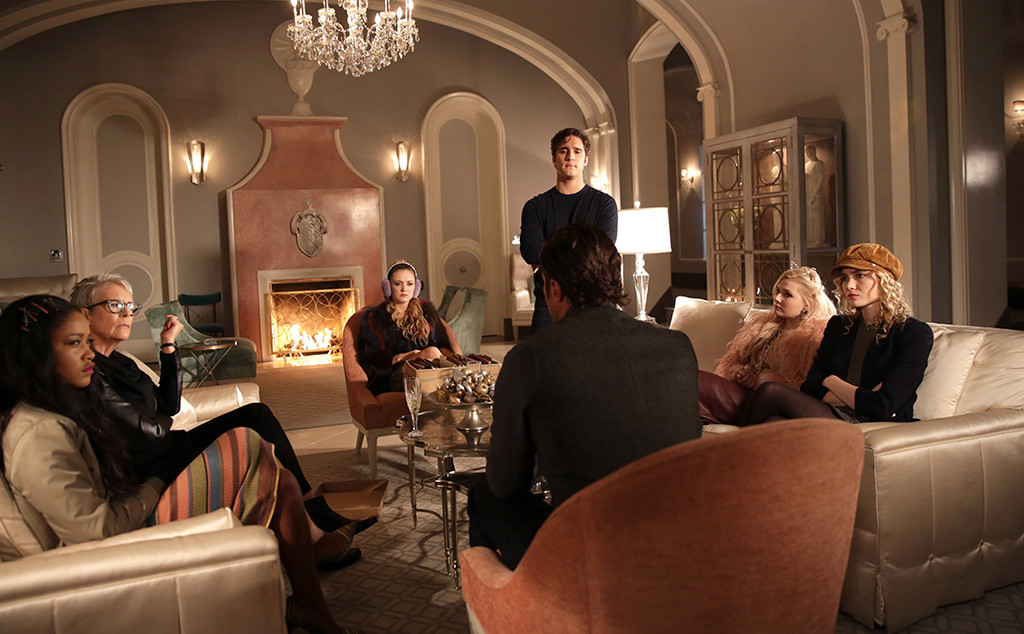 SCREAM QUEENS: L-R: Keke Palmer, Jamie Lee Curtis, Billie Lourd, Oliver Hudson, Diego Boneta, Abigail Breslin, and Skyler Samuels in the "Thanksgiving" episode of SCREAM QUEENS airing Tuesday, Nov. 24 (9:00-10:00 PM ET/PT) on FOX. ©2015 Fox Broadcasting Co. Cr: Patti Perret/FOX.
The Chanels went off to visit their families for Thanksgiving (with the exception of Chanel who went to visit Chad’s family) on Scream Queens, “Thanksgiving,” but they quickly returned to the Kappa house to have Thanksgiving with Grace, Dean Munsch, Zayday, Pete and Wes (as their own families were too awful to be around), and once everyone was together, they all played detective and presented their own case as to who was the murderer.

“Thanksgiving” passed the Bechdel and Russo test but did not pass the race test.

Most of the cast of “Thanksgiving” was composed of women. Consequently, there were plenty of instances where women talked to each other, and on some of these occasions where women talked to each other, the women had names and they did not mention men so the episode passed the Bechdel test. “Thanksgiving” also passed the Russo test, and the episode passed this test because the one LGBTI character that was in the episode, Chanel #3, was not defined by her sexual orientation (e.g., she was instead defined as being a sorority sister) and her removal from the episode would have significantly affected the plot as “Thanksgiving” was an ensemble episode and she is part of the main cast.

As to the race test, there were a couple of non-White individuals in “Thanksgiving,” but the episode did not pass this test because none of the non-White people in the episode ever talked to each other.