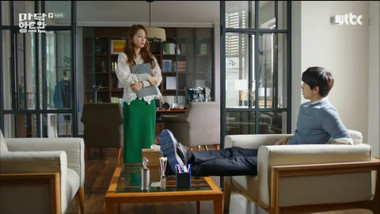 Hye-Rim was furious on Madame Antoine, episode 16. She couldn’t believe that Yoo-Rim and Ji-Ho wanted to get married at such a young age, and while dealing with these two, Hye-Rim also continued in her endeavor to help heal Soo-Hyun from his past scars.

Episode 16 passed the Bechdel test because there were two instances where some of the named women that were in the episode (of which there were a few) talked to one another without mentioning men (e.g., on two separate occasions, Hye-Rim greeted Dr. bae and Yoo-Rim). Episode 16 passed the race test, and easily so, because there were many instances where non-White individuals talked to each other without mentioning White people as the entire cast was Asian and the characters rarely mentioned White people.