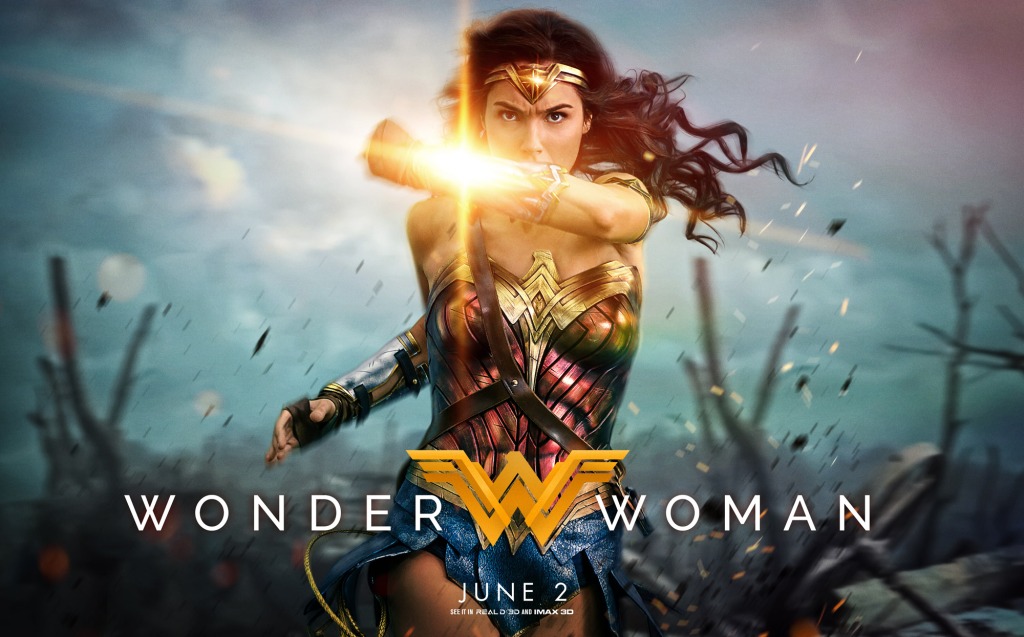 Absolutely killing it at the box office ($438.5 million worldwide thus far), Wonder Woman introduces a new type of superhero – a woman who is both unflinching fierce and compassionate.

Diana (Gal Gadot) is an Amazon who has always been attracted to combat and felt a strong sense of purpose and determination. She, however, has never had a chance to apply or devote herself to a cause as she has always lived on a peaceful and isolated island. When a mysterious man (Steve Trevor as played by Chris Pine) thus arrives on her island and informs her that a world war is occurring, Diana decides to aid humanity (despite all odds and doubts) and sets off on a journey to end the greatest of human wars.

Wonder Woman supports a cast of both women and men. These two genders, however, rarely interact with one another as the film is divided into two parts – Themyscira, the exclusive home to Amazon women and Europe, a man’s land where women, apparently, are an endangered species as they rarely make an appearance. So how does this division of women and men impact Wonder Woman in relation to the Bechdel test? Well, women do talk to each other on several occasions and while only some of the women who talk to each other are named and men are mentioned at least 50% whenever women speak to each other, there are several instances where named women talk to each other without mentioning men so Wonder Woman passes the Bechdel test. Though it should be noted that most of the conversations that take place between the women of Wonder Woman occur because the first 30-40 minutes of the film is comprised of only women. After Diana leaves Themyscira, for example, there is only one other time that women have a conversation with one another and that’s when Diana first meets and befriends Etta Candy (Lucy Davis), Steve’s secretary. Diana and Dr. Maru/Dr. Poison (Elena Anaya), the only other woman of note in the second half of Wonder Woman and a baddie, don’t even speak to one another (in fact, they only encounter each other at the very end of the film and they merely lock eyes).

When it comes to other kinds of diverse representation in Wonder Woman, the film does not fare well. For example, there is only one hint that LGBTQIA characters even exist in Wonder Woman and this is when Antiope (Robin Wright), Diana’s aunt and mentor, is shot and killed by German soldiers and Menalippe (an Amazon) runs to Antiope’s side and cries out in anguish. It is suffice to say that this reference to a same sex relationship puts into question whether or not Wonder Woman passes the Russo test. After all, while Antiope is not solely defined by her sexual orientation (e.g., she is, first and foremost, defined as a warrior and as Diana’s mentor) and she is tied into the plot in such a way that her removal would have a significant effect (again, because she is Diana’s mentor and she shapes the woman that Diana becomes), the actual reference to Antiope’s sexuality is so loose and vague (not to mention that it occurs so quickly that if you blink you’ll miss it) that it is difficult to say that Wonder Woman fully satisfies “identifiably lesbian, gay, bisexual, intersex, queer, asexual and/or transgender” portion of the Russo test.

Wonder Woman does no better when it comes to the inclusion of people of color and meeting the standards of the race test. Case in point, there are only a few people of color in Wonder Woman (e.g., there are a couple of Black Amazons, Sameer [Saïd Taghmaoui] and The Chief [Eugene Brave Rock]); non-White individuals only speak a couple of lines throughout Wonder Woman; there is only one instance where people of color talk to each other (e.g., Sameer discusses breaking into a party and he thinks that he is talking to both Diana and The Chief, but unbeknownst to him, Diana had already left his presence before he had started talking); and Wonder Woman fails to pass the race test because the one time that non-White individuals talk to each other, they do so with the intention and belief that they are also speaking to a White woman (Diana) and they actually mention her while speaking to each other (e.g., once Sameer realizes that Diana wasn’t around while he was speaking, he questions Chief as to where she has gone).

**The Vito Russo test entails three requirements:
1. The film contains a character that is identifiably lesbian, gay, bisexual, intersex, queer, asexual and/or transgender
2. The character must not be solely or predominately defined by her sexual orientation, gender identity and/or as being intersex
3.The character must be tied into the plot in such a way that her removal would have a significant effect

****Just because a film passes the Bechdel, Russo and race test does not mean that it is not sexist, heterosexist, racist and/or cissexist, etc. The Bechdel, Russo and race test is only a bare minimum qualifier for the representation of LGBTQIA individuals, women and people of color in film. The failure to pass these tests also does not identify whether the central character was a woman, a person of color or a LGBTQIA individual and it does not dictate the quality of the film.