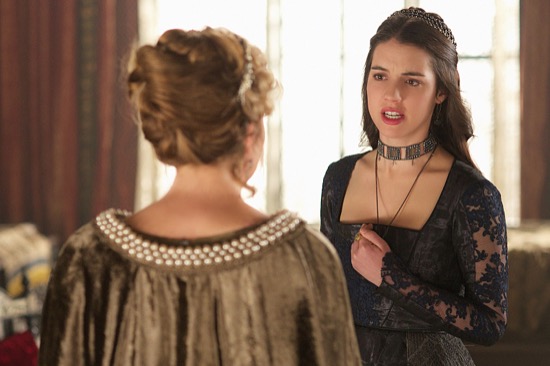 In the finale of Reign, season 2, Mary singlehandedly toppled Condé’s rebellion. She accomplished this by first tricking Condé into believing that she was pregnant with his child and was in need of his protection, and once he believed that she was siding with him, she poisoned his soldiers’ wine, spread a rumor that the plague was in his encampment, and she stabbed Condé. Mary’s actions caused Condé’s soldiers to go into a panic, and with Condé severely wounded, Francis was able to swiftly arrest Condé and end the rebellion.

Once Francis had arrested Condé, Francis had a choice to make, to either execute Condé or to hand Condé over to his (Condé’s) brother. Francis initially chose to let Condé  live, but when he learned that Condé  had tried to kidnap Lola and his (Francis’) son and that his son had died in the process, Francis could no longer allow Condé  to live so he set Condé’s execution. However, Francis soon learned that he had been too hasty in his decision as Condé had not been the one to kidnap Lola and his son but that Catherine had been behind their kidnapping and that his son was still alive. This led to a whole host of other problems, and Francis ultimately made the decision to banish his mother Catherine from France as he could not tolerate her betrayal.

The finale of Reign, “Burn,” did not pass the Bechdel, Russo or race test.