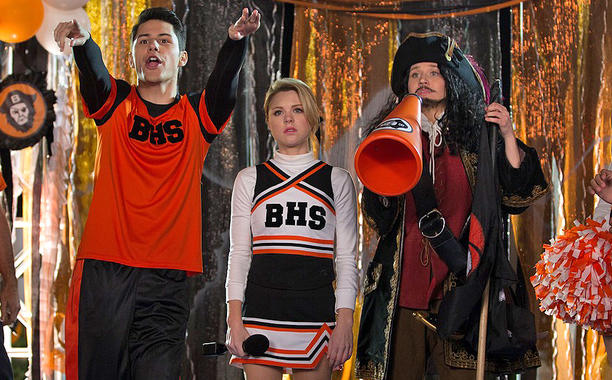 “The Revengers: Age of the Monocle” passed the Bechdel and Russo test but did not pass the race test.

“The Revengers: Age of the Monocle” passed the Bechdel test, and the episode passed this test because of the multiple times that named women talked to each other there were four instances where some of these named women talked to each other without mentioning men (e.g., Amy and Reagan talked to each other about work; Amy, Reagan and Karma talked about Karma working as a caterer; Reagan gave Karma the lowdown on how to do her new job; and Karma offered Raegan’s ex some food). The episode also (obviously) passed the Russo test, and the episode passed this test because there were four LGBTI characters in the episode who were not solely defined by their sexual orientation or intersex status and who were important to the plot of the episode. For example, Amy, Lauren, Reagan and Reagan’s ex (who are all LGBTI) were in the episode; Amy was a sister and a friend, Lauren was a scorned woman out for revenge, Reagan was a caterer and Reagan’s ex was a bartender; and Amy, Lauren, Reagan and Reagen’s ex were all important characters in this episode and none of them could have been taken out of “The Revengers: Age of the Monocle”  without causing the plot of the episode to completely change since this episode was all about Lauren, Amy and Reagan seeking revenge (and in the case of Reagan’s ex, she was important because she was the one that Reagan was seeking revenge against).*****