Skipped out on watching the Grammy Awards this year and what a mistake that turned out to be. Celebrities actually wore interesting outfits; Taylor Swift addressed Kanye West during an acceptance speech; Adele experienced technical difficulties while performing; and Kendrick Lamar blew the top off of the Grammys with  “Blacker The Berry” and “Alright.” The following is the aforementioned highlights of the Grammys in case you, like me, missed out on the red carpet and award ceremony and you are wondering what in the hell exactly happened.

Taylor Swift’s Acceptance Speech for Album of the Year

Taylor Swift won Album of the Year last night, and during her acceptance speech, she addressed Kanye West’s rhymes, “I feel like me and Taylor might still have sex/ Why, I made that bitch famous,” from his new song “Famous.”

This is what Swift had to say:

I want to say to all the young women out there, there are going to be people along the way that will try to undercut your success or take credit for your accomplishments or your fame, but if you just focus on the work and you don’t let those people sidetrack you, someday when you get where you’re going, you’ll look around and you’ll know that it was you and the people who love you that put you there and that will be the greatest feeling in the world.

While performing “All I Ask,” Adele experienced some technical difficulties. She, nonetheless, sung beautifully. You know why? Because that’s what Adele does. She slayzzzzzzzz.

Kendrick Lamar performed “Blacker The Berry” and “Alright” at the Grammys last night, and as Hillary Crosley Coker from The Muse put it, Lamar stunned with his “unapologetic Blackness.”

During his set, Lamar referenced prisons, race, Africa and Compton, amongst other things, and he incorporated neon body paint, an African drum circle, traditional African dance, spoken word and all kinds of pyrotechnics. His performance, it is suffice to say, was stunning and powerful and his set was easily the best part of the Grammys. Just take a look at his audience for confirmation. 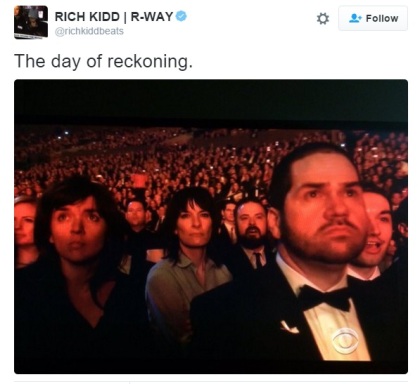 That about says it all. May you rest in peace Grammys.