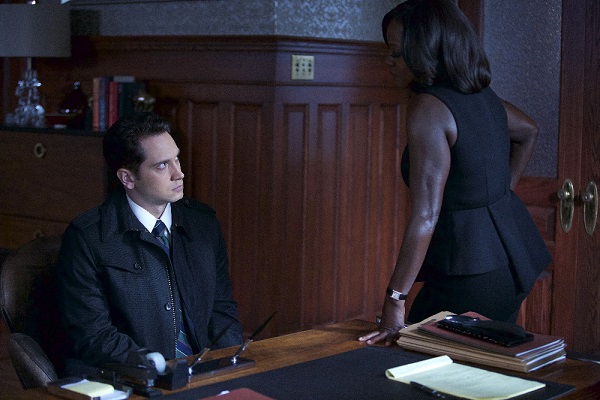 HOW TO GET AWAY WITH MURDER - "Meet Bonnie" - Asher discovers not everything is what it seems when you work for Annalise. Meanwhile, Frank is presented with a situation that hits close to home, and Wes' search to find out more about Rebecca's disappearance culminates into an explosive confrontation, on "How to Get Away with Murder," THURSDAY, OCTOBER 22 (10:00-11:00 p.m., ET) on the ABC Television Network. (ABC/Greg Gayne) MATT MCGORRY, VIOLA DAVIS

On How to Get Away with Murder, “Meet Bonnie,” Asher was told by Bonnie that she had killed Sam, and once he had this information, he struggled on whether or not he should use her information to buy himself a plea deal for his past misdoings.

Annalise, in the meanwhile, worked on discrediting Caleb and Catherine’s aunt’s testimony.

There were a couple of occasions in “Meet Bonnie” where named women talked to each other without mentioning men and non-White people talked to each other without mentioning White people so the episode passed both the Bechdel and race test. “Meet Bonnie” also passed the Russo test, and the episode passed this test due to three different LGBTI characters – Annalise, Connor and Oliver.