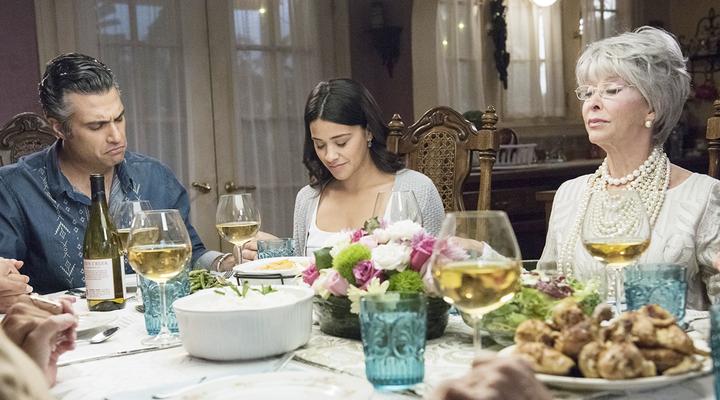 On Jane the Virgin, “Chapter Thirty-One,” Jane began her new job as a T.A.; Petra tried to get her mother to fess up to her crime (i.e., murdering Ivan); Barnett hounded Luisa for info on her mom; Liliana visited the Villanuevas; and Rogelio discovered that his father is gay.

There were two LGBTI characters in “Chapter Thirty-One,” Luisa and Grandpa De La Vega, and because these two were not solely defined by their sexual orientation (e.g., Luisa was also defined as being a daughter and Grandpa De La Vega was defined as being Rogelio’s father) and their removal from “Chapter Thirty-One” would have significantly affected the plot of the episode (e.g., Luisa played an important part in the plot because she helped Barnett and Michael crack the Mutter case and Grandpa De La Vega was important because a large portion of the episode revolved around the Villanuevas keeping his sexual orientation a secret from Rogelio), they both met all of the requirements of the Russo test and they (and thus the episode) passed the Russo test.